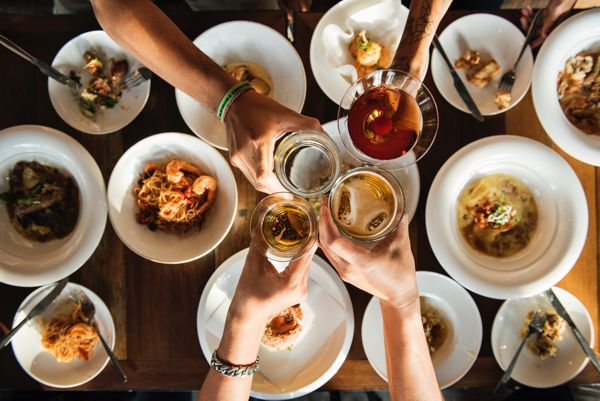 What experiences did I have with “what to eat and what to drink“I still have to write, so I’ll start somewhere and … I see when I finish.

Because I come from a normal / traditional Romanian family, from Moldova (the Romanian part) :D, I ate at home, since a kid – meaning starting at the end of the 70s, which you all know that we had accessible. That is, many fruits and vegetables, but also milk, cheese, eggs and meat. Much of them were from grandparents (my grandparents lived in a small village 7 km from Roman, the town of my childhood). Fruits and vegetables, milk, cheese and eggs were predominant. The meat was not abundant before 1990, but it was not missing either… but I did not like it too much anyway. In fact, I avoided it.

I remember that I began to eat meat more “normal” in the 7th grade in 1990. Until then I avoid it as much as I can, instinctively, though my mother still urged me to finish it out of my plate. So my mother comes home, somewhere in February 1990 I think, with a large amount of smoked chicken thighs. Almost half a bag was. In 1990, for me, there was something quite rare. And I started to eat to eat chicken breasts smoked with yogurt or sana and bread. I liked it so much that that it was the time when I began to eat meat in my life.

Other so-called food (I’m saying it now) that was not free at the time – we had a card – was the refined oil of sunflower and sugar. We had a monthly ticked rate on the card that it was marked when we bought it and … that’s it.

So we had no refined oil at our discretion, to make fried potatoes or other roasted dumplings daily, and also not much sugar. Incomparably fewer options if you compare with what you now find within all “food.”

I make a small bracket to show you that it may be even worse: in September 2017 I arrived for 5 days in New York. Vegetarian being 🙂 . We checked in nicely (not at the hotel, but at the hotel apartment) and I said, let’s go get something to have for breakfast and dinner, as during the day we visit, normally. Well, we did not find any bread to buy. Nowhere! And when I say bread I mean bread with whole flour, yeast and salt. Not those things that you can call dishwashers (they were reacting the same at pressure 😆 😆 😆 ) that had either sugar or corn syrup … Believe me, I’ve been looking for all five days to buy a normal bread . Nothing 🙁

So it can be worse.

So, going back to me in the childhood, I was a little forced to eat more fresh, cooked, baked foods, less bacon or sweets.

Many, many things were missing from the eating options and that was very good. For example, there were no fast food like McDonalds or KFC. And “refreshing” juices were quite rare. And expensive, at least for me. That period had also had her good parts 😉

Instead, usually for holidays and other events, the table was filled with various heavy meals: ”sarmale” with meat, boeuf salad with meat – that’s normal, stuffed eggs, sausages, chicken legs, pork, as well as how many more. Sweets like “chec” or pie, cake, “Paska”, various. For New Years Eve or Easter, their preparation took 2 days, even 3 sometimes. Pfff … what a mess it was to make mayonnaise with a spoon!!, vertical mixer we did not have: roll:

I remember that after 1990 there were those TEC dispensers where you could found “refreshing juices” with various flavors. That is water with carbon dioxide, syrup and various chemicals. Not even sugar, but aspartam!!! Pure poison!!! Many I’ve been able to test and I was not even eighteen 🙂 🙂

Then at 14, I went to the police high school. For those who do not know, that means closed life – you stay in the yard all week and eat what you get. Regular and obligatory life :D, waking up in the morning at 6 o’clock with refreshment time (i.e. 15 minutes of physical exercise), with regular sports, with many other activities that were physically demanding. The food was cooked almost all, except at breakfast where I had butter, cheese, salami … ”regular” stuff. Plus the habitual bromide tea (no, I do not remember seeing someone personally putting bromide in tea, but everyone was talking about it …).

I think most of us have had such a diet. It was what we found here. But is good? I know now that it is not. It’s not good. So I will continue the series on this topic because unlike what we ate and drank during that period, things have changed a lot. I’ve been looking for a lot of information about how to feed myself, what’s good and what’s not gonna get into my mouth. When and how.

Because I have experienced many things on this subject, I have come to understand some of the aspects I have formulated in the principles that you find here.

Until next time! … you can also read the following. They will be at the end of all the food and drink episodes, because they are second in importance in our lives from my point of view and everyone seems to have something to say about it.

For some time (that is, for decades), a food industry has grown in the world that tells us through various channels (newspapers, radio, TV, magazines, the Internet, social media – Facebook etc, so everywhere) directly or hidden (articles, studies paid directly or not, advertising, even doctors, nutritionists, etc.) what to eat and drink.

But these recommendations are sometimes, quite often, quite dubious and easy to question. No, there is no conspiracy. Are from here, among us, those working in this industry, not aliens or a superior race of people who want to stay alone on the planet: mrgreen:

As you imagine yourself, the basic motivation for most recommendations is profit. Consumer Society – who, for some decades, had an important role in economic development – it kills us now slowly, slowly. For real 🙁 Another is emotional attachment of various foods / styles to eat. Then there is ignorance. Even if someone works in the food industry does not mean that he understands / knows what’s going on there, what’s good to eat and what not. Just as most doctors are not healthy. Yes. Sad 🙁 And they tell us, the patients, how to be healthy. A joke often macabre … considering the authority they have in front of us.

And because food and drink are second and third in importance in our lives from our point of view, we have gathered here and here a set of clean, unencumbered pecuniary interests (see here), which are related to our experiences of how to feed me better and what to drink.

I invite you to read them with detachment: food and drink topics are very emotionally related. And if you are really open, you can, with just a dose of common sense and the simple human intelligence that we all have, know what makes you really good and what does not.