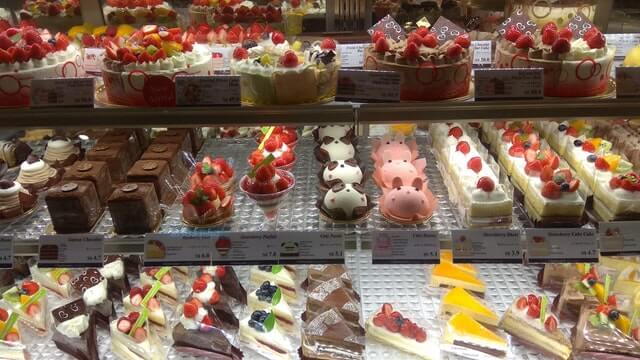 I liked sweets since I know myself, since kid. At least when I was young, my mother and my grandmother made me all I wanted: pies, pancakes, candies and much more, and were healthier, at least made with “household” ingredients, flour, milk, egg, etc. And even though until the adolescence there I had very good burns and a healthy body, and there was no trace of what I ate.

But from the age of 17-18 I began to eat sweets seriously, those made to be sold! That’s because everyone wanted to “spoil” me with something “good”. I remember what gift I received from one of my ex-lovers, Mădălin, at a Easter, a gift that enchanted me enormously: a chocolate bunny about a meter height and 10-12 kg !!! Do you know what I did? Because it was hot outside, I took a hammer and broke all the chocolate rabbit in the small pieces and I put in the fridge. Until here… maybe nothing out of the ordinary. But I ate it all, alone, in about 2 weeks !!!

And so I went on for a few years!

I had candy supply in the refrigerator as before the war. Pancakes and cakes were my favorites

For years, at the end of the work program, I was going to the cake shop, the same cake shop every time!, and I was taking a plate of cakes, the sweetest possible, with a lot of chocolate. I had become their favorite client there. Especially since daily 1 kg of minicakes meant some money thrown on that addiction.

I remember that for my birthday I usually bought 2 cakes: one for my friends and one for me. And yes, I could eat enough of a cake: one time a half, another time three quarters … depends on the state …

I remember a few nights when I could not sleep that I did not eat anything sweet, or I did not eat enough, and went out to the gas station to buy me… any sweet. Maybe it does not seem too much, but I have to say that until you get into the car, until you get to the gas station, the closest was about 10 km, that deh … in Snagov there are not many gas stations now, but 15 years ago… and I forgot to mention that I only took up at 3-4 in the morning… in total there was a great effort of energy, time and money for such a fad.

My mother was really worried about me, I was surprising her by talking to my friends and relatives that she did not know what to do to make me stop eating so much sweet, sometimes I was getting tired of it on this subject. To be quiet I was even at a polyclinic to do my blood glucose analyzes once with her, of course, not to trick the results on the way home… And, what to see? My blood sugar was impeccable! So much for me! I ate even more and more, and no more remorse … only what was very sweet. I was no longer satisfied with any.

Even more times, to be left alone, I explain to everyone that if I do not eat something sweet then I will make a crisis, I am sick, faint …

My misfortune was, I can say now, that I had an athletic constitution and the very good burns that I did not fatten a pound… in high school I had the same weight of 57 kg at 1.73 height, I was comfortable so, especially that there was no surplus of me.

Now I think you’re wondering what happened, what has changed since I stopped eating sweets…? Well, at the age of 24 I started living with my ex-husband, Iulian, at Snagov, along with my parents. And he was repeating to me that the amount of sweets I eat is not okay, not necessarily that I eat…. I had to get a 5 kg Fineti bucket in the fridge, those from what you’re making industrial pancakes. I remember that one night, at 4:00, I woke up and sneaked in the hall where the refrigerator was, took my chocolate bucket and stood with the light off, lest I wake up somebody. Iulian really got up and found me standing on the carpet with the bucket between my legs and eating chocolate with a spoon (not a teaspoon!). He looked at me, between accuser and pity I would say, that from that moment I started to realize I had a problem. Hiding from someone dear to eat sweets … is not okay. And I intended to stop eating, not so many.

The next few years I consumed moderately sweets, studying more and more about health and what the ravages produce sweets in my body. I often preferred to eat a raw or raw vegan cake, but I still get sometime a slice of cake, that I could not refuse it at a party or office! I even had an unhealthy habit of taking something sweet every day at the office, that it was cute to eat with the girls.

That until March 2018 when I felt a need, an impulse to make a change. In all areas of my life. I’ve started with food. I kept an alkalinizing diet (only alkaline foods) that for me that I used to drink sweets and quite a lot of dairy, made a big difference (meat I was not eating for 10 years already). The cure was for 18 days, at first quite over my hand that I did not know what to cook, I didn’t felt full so fast …

Meanwhile, show up in my life Sebastian, vegan for a few years. When we started talking about eating, he became very firm: no sweets at all!!! And without dairy too, not at all!!! Even after this cure ends! In addition, giving up sugar has helped me a lot, because I started loosing weight. Meanwhile I was reaching to 65 kg, pretty much even for my height, I wasn’t feeling good in my skin, in my clothes …

Over the next 3 months, I lost 14 kg, mostly due to food change alone. And perseverance. My mind ran out of something sweet once in a while, but I did not touch anything sweet until I saw the 50 kg weigh. And since then, whenever I have a craving for something sweet I make a raw vegan cake or a cake that is very simple and not at all costly, being really useful to my body, not having all those side effects.

In the end, I can only say that I am grateful to the Universe for not having any illness considering how much I abused my body … and that I woke up in time!